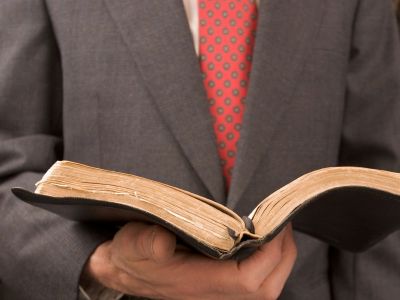 "Biblical Separation is the Bible's clear command that true Christians are to remain separate from all personal, social, and ecclesiastical relationships with those who call themselves Christians, but want to live a life of sin.  Fundamentalist Baptists therefore remain separate from apostate Protestantism as well remaining separate from The Great Whore of Roman Catholicism mentioned in Chapter 17 of the Book of Revelation.  The Bible says:

"Ye adulterers and adulteresses, know ye not that the friendship of the world is enmity with God?  Whosoever therefore will be a friend of the world is the enemy of God." (James 4:4)

"Wherefore come out from among them, and be ye separate, saith the Lord, and touch not the unclean thing; and I will receive you," (2 Corinthians 6:17)

In the world's love for violence, many people watch extremely violent movies such as "Kill Bill II"; or the anti-Semitic Mel Gibson's "The Passion of The Christ"; or "The Texas Chainsaw Massacre".  Some also pay lots of money to see violent boxing matches on "Pay-Per-View" television.

The rejection of violence by Fundamentalist Baptists is in stark contrast to those so-called "Fundamentalist  Muslims" who murdered so many Americans in the attack upon the World Trade Center back on September 11, 2001.  There of course is no such thing as "Fundamentalist Muslims", since the term "Fundamentalist" dates back to those pamphlets expressing historical Baptist Bible doctrines, and no Muslim believes such doctrines.

These so-called "Fundamentalist" Muslims (i.e. Koran-believing Muslims) that many in the media were referring to were strongly in favor of both violence and murder.  In fact, all true followers of the religion of Islam believe that it is their solemn religious duty, (as directly commanded of them by the Koran), to murder Christians, Jews, and others by beheading or other methods. (Koran: "Strike off their heads till ye have made a great slaughter among them." - Sura 47:4).

Those Muslims who refuse to commit such mass-murder, as commanded of them by Mohammed in the Koran, are therefore deliberately disobedient to the Koran.  So-called "Radical Muslims" are therefore simply "Koran-believing Muslims", because if they believe the Koran, they will go out and murder non-Muslims as the Koran requires of them.

"But I say unto you, Love your enemies, bless them that curse you, do good to them that hate you, and pray for them which despitefully use you, and persecute you;"  (Matthew 5:44)

Nevertheless, New Evangelicals and other non-Fundamentalist Baptists often reject this teaching from the Bible.  As an example of this rejection of the Word of God by New Evangelicals, Dr. James Dobson often speaks of Christians needing to keep a "Focus on the Family".  Of course, by this Dr. Dobson means that the family must be the primary focus to Christians, instead of Jesus and the Bible coming first.  Jesus, however, disagrees quite strongly with this idea made popular by Dr. Dobson and other New Evangelicals.  Jesus said:

"If any man come to me, and hate not his father, and mother, and wife, and children, and brethren, and sisters, yea, and his own life also, he cannot be my disciple." (Luke 14:26)

The fact is, Jesus and the Bible always come first to a Fundamentalist Baptist, and so the family therefore cannot come first.  Someone who places his or her family before Jesus and the Bible has committed a sin against God by treating something else as being "more important" than God and His Word, the Bible.  Jesus himself said that you are not worthy of Him if you commit this great sin of placing someone or something else before Him.

"If any man love not the Lord Jesus Christ, let him be Anathema Maran-atha." (1 Corinthians 16:22)

This means that you are under the curse of God if you do not love God's Son Jesus Christ.  Also, do you love God the Father?

"Love not the world, neither the things that are in the world. If any man love the world, the love of the Father is not in him." (1 John 2:15)

Clearly, loving God is the "first" and greatest commandment in the Bible.  If you do not have love for God the Father and for His Son Jesus, it is because you are "lost" in your sin.  "Jesus First" is not the cry of your heart, because your heart is filled with wicked sin and rebellion against God.  You are still traveling down the road leading to Hell. God loves you though, and sent His Son Jesus to die on a cross to pay for your sin:

"For God so loved the world, that he gave his only begotten Son, that whosoever believeth in him should not perish, but have everlasting life." (John 3:16)

Whatever it is that you love more than Jesus is your sin.  Give it up.  Trust Jesus and He will save you from your wicked sin.  Jesus is in Heaven now, sitting at the right hand of God The Father.  Jesus is ready to forgive your sins if you will trust Him.

If you refuse to trust Jesus right now, claiming rather that you will "do it later", the reason for your procrastination is that deep down you love darkness rather than light.  (You want to sow just a few more "wild oats" as you commit "just a little bit more sin", raising your fist against God and against God's Inerrant Word, The Bible.)  Therefore, if you refuse to trust Jesus, Hell will be the just reward for the sin you love so much:

"For every one that doeth evil hateth the light, neither cometh to the light, lest his deeds should be reproved." (John 3:20)

If you trust Jesus, He will save you:

"All that the Father giveth me shall come to me; and him that cometh to me I will in no wise cast out." (John 6:37)

Trust Jesus.  Then, put "Jesus First" by finding a good Fundamentalist Baptist Church to attend.  (Don't be satisfied with one that just calls itself "Fundamentalist" but is actually just a Biblical Separation-rejecting and/or Christian Militancy-rejecting New Evangelical church).  Find the "real thing".